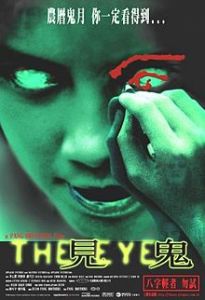 We often take for granted the abilities we have, and in the same breath, envy those of others. Something as basic as sight is a sense most of us use nearly constantly, and have no reason to question; so much so that it’s hard to imagine life any other way. The Eye brings the audience into the fold from the opposite side of this – when the lack of something is what you take for granted, adjusting to having it thrust upon you can be a disorienting experience.

The Eye follows Mun, a woman who has been blind since she was a child. As it appears, she is living a perfectly full and functional life, but given the opportunity to have a cornea transplant and regain her vision, she takes the chance. Upon completing a successful surgery, Mun attempts to transition into a world that seems almost entirely new to her. Before long, she starts to notice things that seem strange, or out of place, but as no one else around her seems to notice them, she assumes that they’re normal. However, as time goes on, she begins to realize that she is the only one seeing these things, and her newfound vision is giving her much more than she expected.

There are a few things to consider in this film. There is, of course, the most significant haunting that Mun experiences – the one within her own body. Realizing that by receiving a deceased woman’s corneas, she also received her prophetic gift, and now must share the body with her, Mun is disturbed and looks to purge herself. In doing this, we are able to explore the previous woman, named Ling, and her plight. Ling’s story is a sympathetic and tragic one, that Mun must ultimately echo and relive within her own body if she cannot forge a different path. This haunting is invasive and yet symbiotic – Mun helps Ling gain resolution in her death, and Ling brings Mun to a greater understanding of own life.

There is a beautiful relationship that forms between Mun and a young girl with cancer at the hospital named Ying Ying. The friendship serves a number of purposes – it anchors Mun to something positive and good, amidst all of the terrifying experiences going on around her. It also helps Mun, and the audience, understand a subtle truth about the prophetic visions she’s experiencing; the dark figures that show up for each death are not malicious. They simply are. For Ying Ying, meeting hers is a moment of freedom and joy, from the sickness and the pain that she was plagued with in life.

This film is a classic of Chinese horror, and for a good reason. There’s an emotional resonance in this piece that is more potent than a lot of more straightforward ghost stories. The main story lacks a real element of ‘evil’ and becomes a lot more amiguous – the situations Mun finds herself in are frightening, but are they always dangerous? The answer is often debatable. Rather than tackling the story are a straightforward horror, it leans more towards being part ghost story, and part Greek tragedy.

This is a modern retelling of the Cassandra tale, and poses some of the same philosophical questions. Is it worth having the gift of foresight if one is unable to act on it, or is the gift itself more of a curse? As Mun’s final words in the film ring out, “I no longer question why I am blind,” we seem to get some kind of answer.

Scariness level: You may have never thought much about getting into an empty elevator by yourself, but you may rethink that life choice. Also, anything involving buying meat.

Bechdel test: Mun and Ying Ying are amazing and adorable together. Pass.

Mako Mori test: Mun’s story has male supporting characters in it, but the whole story revolves around her. Pass.

Posted on May 11, 2015, in Films and tagged 4 rating, chinese, pang brothers, pass, the eye. Bookmark the permalink. Leave a comment.