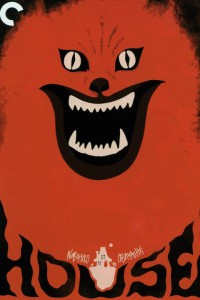 Imagine, if you will, taking the striking visuals of Suspiria, the musical stylings of The Rocky Horror Picture Show, and the innate weirdness of Evil Dead, and putting it all into a blender, operated by David Lynch. Then, take the contents of that blender, and spill it somewhere in 1970s Japan. The image you’ve gotten in your head might begin to come somewhere near what the experience of watching House is like. This is a film that takes such glee in its own strange, surrealistic story, that it has to be seen to be truly understood.

The plot of House revolves mostly around a young school girl named Gorgeous, who learns that her father intends to marry a new woman. She immediately rejects this, still hanging onto the memory of her mother, who died eight years earlier. Instead of going on vacation with her father and his fiance, as intended, she convinces six of her friends to join her on a trip to the countryside, where her mother was from, and where her aging aunt still resides. Once they are there, increasingly strange events begin to take place as the seemingly peaceful countryside house attempts to eat the girls.

The film plays out like a vivid fever dream, its color palette akin to the likes of Suspiria, but instead of drawing the audience in, it aggressively keeps us from becoming too immersed in the story. The first act is full of lush set pieces, music so upbeat you feel the film may become a musical at any moment, and cheesy transitions rarely seen outside of basic video editing software. This glossy facade is cultivated so well at the beginning that it begs to be shattered – and on this promise, the film delivers.

The film uses several techniques that I am fond of in fiction, but are tricky to wield: surrealism and metafiction. The boldness of the visuals, paired with the strange events, create a bizarre dreamscape that feels increasingly like a nightmare as the events begin to turn. The metafictional elements play into this, the movie occasionally acknowledging its own strangeness.  The best example of this is when the girls provide voice over commentary for an old memory that plays out like a film reel – and they comment on the details as though they are watching it the same way we are.

The characters are somewhat one dimensional, which would normally be a big strike against the film for me, but in the case of this film, it adds to the fairy tale atmosphere. Each girl seems to have one defining characteristic that she contributes to the story’s progression, and little else is done to explore them individually. Seven young girls travel out to the country, where there is a white haired old woman intent on doing them harm – essentially the pure young maidens versus the wicked witch. There’s a nice simplicity to that, which could easily be muddled by extraneous plot elements.

Arguably, Gorgeous is more developed than the others, but even that is stated mildly. She’s the focal point of the story, and ultimately, the story seems to be that of her own coming of age.  She runs away from what seems to be a terrifying change for her (her father marrying a new woman), but regardless of where she runs, she has no choice but to change in some way.  She’s something of an everywoman, who the audience accompanies on her sexual and emotional awakening. With that, we can see that her development happens more in symbolic terms than explicit.

The film is wrought with symbolism, so much so that a lot of it looks like chaotic nonsense. There are instances that are much more glaring than others – Gorgeous, for instance, wears white from head to toe in nearly every scene. It escalates to a point where she is seen in full bridal wear towards the climax of the film. Her purity seems to be something essential to the story. And later, a painting of a cat begins to spew blood, soaking the white gown. If that’s not a virginity metaphor, my years of education have done me a grave disservice.

As for the other girls? They’re archetypal, generally reduced to a single characteristic. I’ve seen it stated that this is meant to represent the seven deadly sins, which must be defeated in order to reach maturity. White it’s easy to see where this interpretation stems from, the girls don’t line up cleanly enough to fully support it. There is a way of reading the film and its characters that I like much better, and gives the piece a sympathetic voice towards the women it’s depicting.

Each girl could, instead, be a piece of the self that must be repressed, or even destroyed, once a woman accepts the responsibility of “growing up” – in this case, taking on the domestic role of a wife. The final exchange between Gorgeous and her not-yet stepmother at the end lends credence to this idea. When asked where her friends are, she states that they are sleeping, but will wake when they are hungry.

Male presence in the film is minor, but not completely absent.  There are two or three male characters in the film, but they are practically non-entities. One of them is never physically present and exists more as an idea – a symbol of love and betrayal to the girls, though his actions do influence the plot. The other is really only seen in something of a b-plot and has little to no effect on the main story line.

If all of this sounds a bit too cerebral for you, never fear: there is more than enough violence to keep the average horror fan sated. A girl gets eaten and dismembered by a piano, for goodness sake. Honestly, maybe this movie is just weird. The enjoyment I get out of it is primarily derived from peeling back the strange to see what might be underneath. You might have more fun allowing yourself to be submerged in it. Both are good ways to watch this film.

If you’re a fan of Lynchian levels of strange, I’d highly recommend you check this out. Even if that’s not your cup of tea, it’s worth at least one watch just to experience it. If you’re on the fence about it, I’ll say one thing: whatever you may get out of this film, meaning-wise, it’s unlikely that you’ll be bored by it.

Rating: 4 out of 5. Crazy and entertaining. My favorite combination!  And just try to get “Cherries Were Made For Eating” out of your head after you hear it featured in the movie.

Scariness level: The cheesy effects take away from its ability to truly frighten, and it veers into being funny, but there are certainly unsettling moments. Especially if surrealism is your thing.

Violence level: If you can dream it, someone was likely murdered by it in this. Once again, the effects are dated and wacky, but charmingly insane. Plenty of high-pressure explosions of blood.

Bechdel Test: Pass. 90% of the cast is female and while they discuss men often, they more frequently discuss the aunt, the house, and each other.

Mako Mori test: Gorgeous is arguably the only one who gets any form of character arc in this.