← Re-Cycle
She Walks In Shadows → 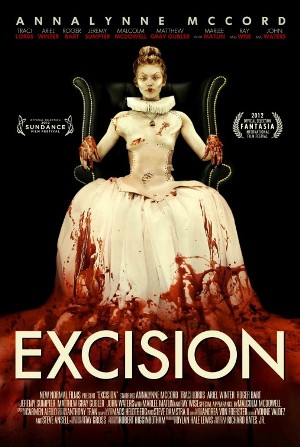 Stories about outsiders and loners are popular, often because there’s something deep down that we can relate to in the characters represented. In horror, it often plays into our fears of rejection and social ostracization. In some cases, we also are allowed to feel their anger vicariously through them, and even cheer them on as they finally give in to their madness; Carrie White is one of the most famous examples of this.

Excision is a film that presents a typical loner narrative, but with an uncomfortable closeness to the madness that it is depicting – one that an audience might fear relating too deeply with in the end.

Pauline is a senior in high school, with few friends, poor grades, and a strained relationship with both of her parents. What she does have are aspirations to one day become a surgeon, and a loving connection to her seriously ill younger sister. As the story follows Pauline, she continues to alienate people, pushing her towards taking even more extreme actions to reach out for the help and acceptance she craves – but people are unaware just how far she is willing to go to gain their approval.

It is difficult to characterize the plot of this film, as it’s much more of a character study than a straightforward story. Pauline herself is the central plot, and the unraveling of her mind is the narrative thread that we follow throughout. She begins the film as an odd and socially awkward young woman, but from the very beginning the audience is given a view into her inner world: and we learn, rather quickly, that this vivid and rich inner world is much more unusual than her outer actions initially suggest. She might be anti-social and defiant towards authority, but her visceral, gory, and sexual dreams about bathing in gore and committing violent acts are jarring nonetheless.

Being a character study, Pauline is actually quite a fascinating character to observe: she is confident, in touch with her sexual desires, and self-aware (to the point of even being a meta commentary on her own story), and she has complicated layers to her. It’s certainly easy to see her as simply acting out due to her own mental illness, but it’s not so simple as to dismiss her as a sociopath that doesn’t care for others; one of the biggest driving forces behind her actions is her deep affection for her younger sister, who she clearly feels safe around and openly communicates with. Even her most damaged relationship, which is with her mother, is not without its own emotion and craving for love – when Pauline overhears a particularly hurtful statement from her mother, the audience sees her break down, despite showing nothing but hatred for her mother the rest of the film.

The way this deals with both sexuality and mental illness is frank and direct, which has its own victories and failings. Pauline isn’t afraid of her own sexual desires, and embraces them fully – in all their weirdness. When she wants to lose her virginity, she approaches the boy she’s selected and informs him that she’s interested, leaving her number behind. There’s a refreshing unapologetic boldness to her in that regard. However, she also seems to conflate sexuality with violence and power, and uses her sexuality in harmful ways towards others. Her mental illness, also, is shown with a great amount of acknowledgment. Pauline even diagnoses herself at one point in the film, with Borderline Personality Disorder, which her mother dismisses as more of her daughter’s nonsense. Whether or not that diagnosis was actually true or not is beside the point; it’s clear that Pauline recognizes herself as out of the norm, and takes actions to alert others to this fact.

In terms of the film being scary, it can probably be viewed on two different levels. This is a bit of a splatter-fest, in terms of violence, and if that’s your thing in horror, you’ll more than likely be satisfied with the intense (albeit highly stylized) bursts of violent imagery that are woven throughout the film when Pauline dreams or fantasizes. On the other end of the spectrum, there is the fear that, perhaps, is borne more out of watching a preventable, and yet unstoppable, tragedy unfold in front of you; both in the case of Pauline’s sanity, and the actions it ultimately causes her to take. It’s an unsettling experience in both regards, so I think that most viewers will feel there’s sufficient scariness there to last after the film ends.

This is a film about pathways: both those taken and untaken, and the tragedy in all of them. There are many points in this film where Pauline’s course of action may have well been changed, where she pleads for help both with behavior and with words, and she goes unheard. This film toys with the question, then, about whose fault is it, ultimately, and who should be held most responsible for the actions she takes? The film ends without answering those questions, cutting it off at its most emotionally brutal moment, and allowing that question to linger in the air.

Rating: 3.5 out of 5. Solid film with some interesting relationships explored. It’s certainly a film that lingers in your mind for a while.

Violence level: Very high. Higher than my taste would usually appreciate, but the stylized and somewhat comical nature of the fantasy sequences make it more palatable if you’re squeamish. Nothing keeps that last few minutes from being horrifically dark, though, and the gore is only a small fraction of the reason why.

Scariness level: There’s a deep, unsettling feeling through this film, and it will likely stay with you after you’ve finished watching it. It won’t necessarily scare you in the way that you feel something is stalking you in the dark, but it will perhaps make you rethink what is going on in the minds of people you come across.

Bechdel test: Pass! Pauline is very close with her sister, Grace, and interacts frequently with her mother. There are quite a few other women featured, and while men are spoken about, there’s a lot of substance to her two primary relationships.

Mako Mori test: This story is about Pauline, plain and simple, and the men that have a part in her story are only incidental to it, rather than central.

← Re-Cycle
She Walks In Shadows →